A couple of items concerning theft in the Christchurch red-zone have hit the news recently. Firstly the case of Victor Tupotahi Jackson who stole around $23,000 worth of merchandise while working as a contractor and secondly an as of yet unnamed police officer who was accused of stealing sunglasses from a store.

Jackson wound up in jail for 2 years with a $6000 reparation bill as the police recovered about $17,000 worth of goods. The police officer was not convicted because "Officers' fingerprints are recorded for elimination purposes, but it is not lawful for these to be used for any other purpose.  As a result the decision was made, reluctantly, that charges could not be brought against the constable."

Sounds fairly standard - though one does wonder if the officer should have faced a charge at least. But some commentator/blogger thought there was something odd about this and wrote a piece about the two cases - drawing them together in a baffling manner.

It was this quote on The Standard which got me thinking: 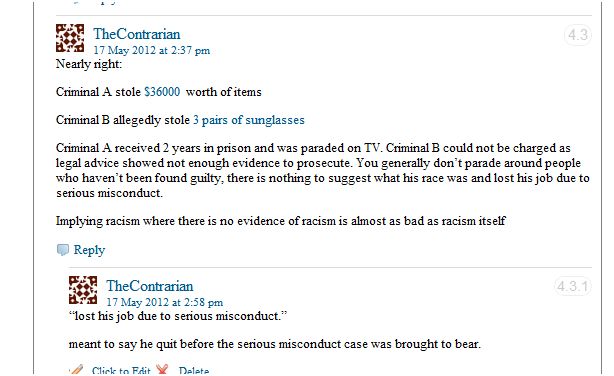 After receiving no response and my curiosity growing I replied directly to the blog posting: 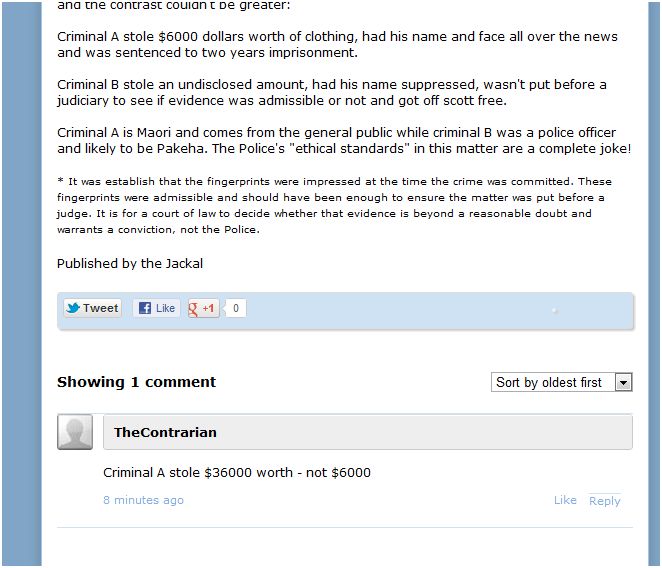 The Jackal responded with recent link clarifying the amount stolen by Jackson but the missing sunglasses went from three to at least six: 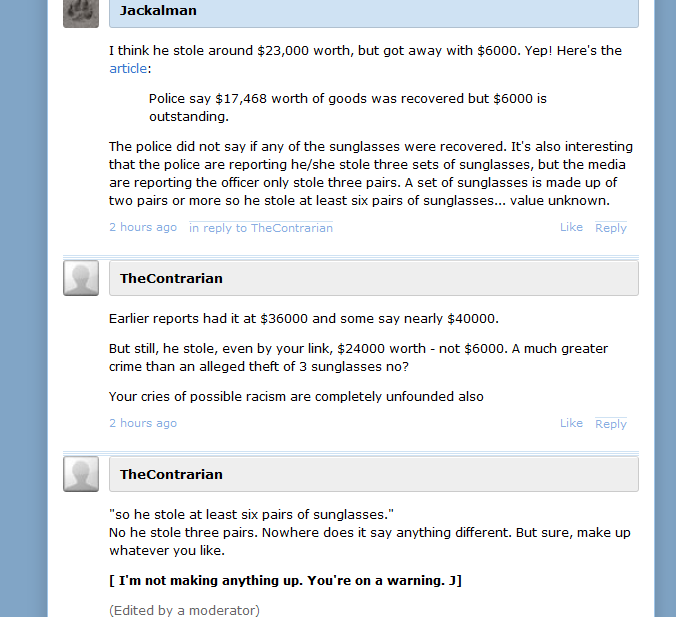 I mistyped and wrote "$24,000" instead of "$23,000" not that it changed the point. Following up with another comment, I wondered about where those extra sunglasses had appeared from. As you can see I received a stern warning for my outrageous adherence to facts.

In the next post Jackal iterated the issue was in fact about the policeman getting away with apparent theft followed by the issue of race:

For the record, I don't want to get involved in racial disputes. It is counter-productive and I find it brings the worst out of people so I wanted sidestep that particular point while not avoiding it - but still addressing the other points raised: 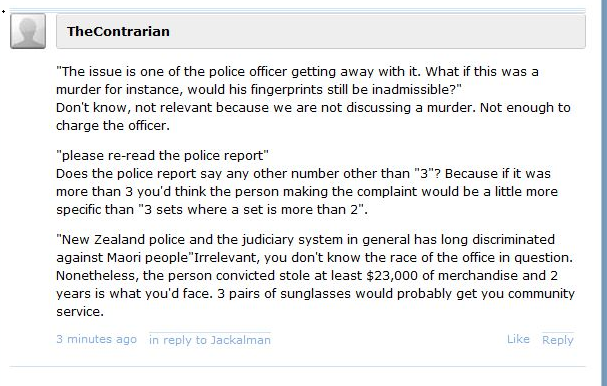 No more of these silly questions:

Ahhhh, well. Perhaps I should ask if he thought these were $8000 magic sunglasses?

The Jackal actually did make amends to his error though:

Criminal A merely got away with $6000. Right, that fixes everything. Hell, if I go on a shooting spree one day I have a wonderful defence. "Not to worry judge, while I tried to kill 26 people I only actually killed six."
Is this what they call attempted theft? I would have pointed out this wonderful inconsistency but for:

But why does this matter? What is gained from bothering some poor fool who no one listens to on the back-ends of the internet? The reason this matters is because the commentator in question posts this sort of thing on sites that have a wide audience (like The Standard). Gibberish like this gets promulgated, regurgitated and spat out as truth. Even by people who should know better. And no one cares about actually doing their research, all they want is a convenient excuse, no matter how fanciful, to shore up their preconceived biases.

It is something I find quite absurd, hilarious and angering all at the same time.

Seems The Jackalman wasn't too appreciative of my deconstruction concerning his dishonesty and bullshit claims so he has decided to retort with a strawman. Hilariously though he links to a video wherein the Police confirm that 3 pairs of sunglasses were stolen. Ahhh well buddy, better luck next time.
Posted by The Contrarian at 20:08

The only comments which will be deleted are those of a racist, sexist or homophobic nature. Abusive posts may or may not be deleted, dependent on inanity and hilarity.